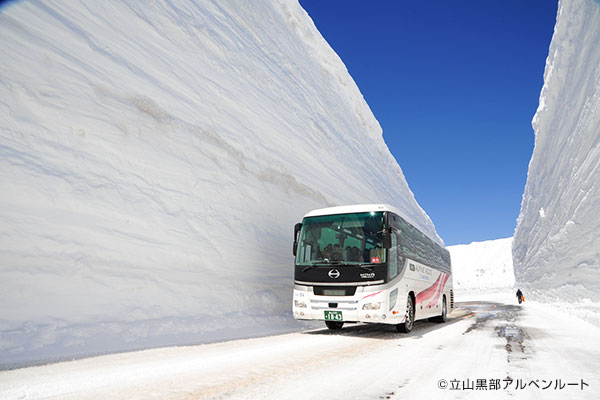 The Tateyama Kurobe Alpine Route, which straddles Toyama and Nagano Prefectures along Japan’s Northern Alps, is one of the world’s finest alpine sightseeing tracks. Different sections of the route’s 37.2 kilometers between Tateyama and Ogizawa stations (and its maximum vertical difference of 1,975 meters) are served by various modes of transport, including cable car, ropeway, trolley bus, and Highland Bus. The route opens when the snow has been cleared in mid-April, and offers visitors scenes unlike anything “down below.”

The main attraction when the route is first opens is the “snow walls” at Murodo, the route’s peak at around 2,450 meters. The walls are caused by the roads literally being carved through snow up to 20 meters deep over a period of around two months before spring arrives. Riding the bus along the snow-walled roads is exhilarating, and to feel the contrast between the dazzling snow and the azure sky on one of the special snow-wall walks between mid-April and late June is to experience a thrill like no other. 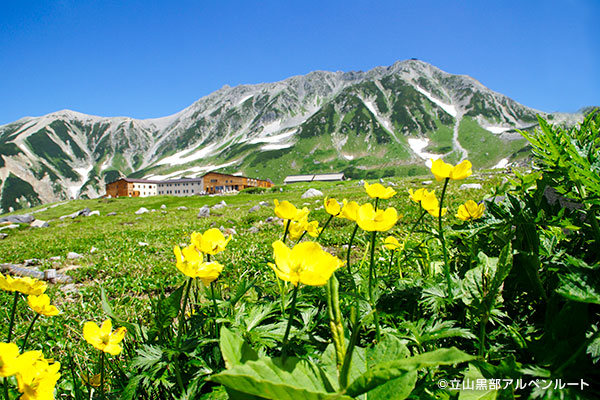 Later seasons have their own attractions, such as Mikurigaike Pond emerging from its snowy blanket, the postcard perfection of the Tateyama mountains range on the pond’s still deep-blue surface, and the utter pleasure of walking amid the fresh summer greenery.

The area is home to diverse mountain plant life, and if you are lucky, you might see a rock ptarmigan—an endangered species and a Special Natural Monument in Japan. Remember, though, that this is an alpine route, so don’t forget to pack clothes and provisions suitable for the season. 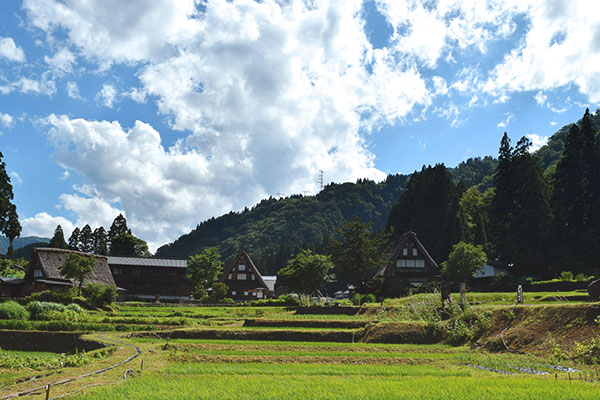 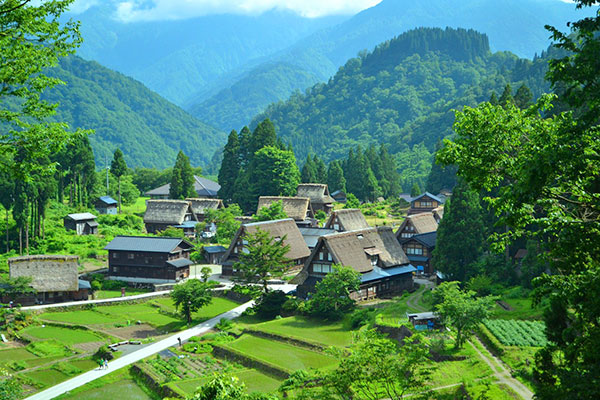 A short hour’s drive from Toyama and Kanazawa, Gokayama is an area of some 40 hamlets nestled in the lush natural environment along the Shogawa River at the southwestern extremity of Toyama Prefecture. The area is picturesque, featuring rare living examples of gassho-zukuri houses, the characteristically pointy-roofed homes developed for life in snow country. In addition, Ainokura village, a World Heritage Site, retains vestiges of bygone days in its rice fields, avalanche-prevention forests, and stone walls; the Ainokura Folklore Museum and the Ainokura Traditional Industry Museum tell stories of lifestyles and industry in the old days; while the Gokayama Washi Making Experience Hall gives visitors a chance to try their hand at making one of the region’s foremost specialty products. Another World Heritage Site, Suganuma village features earthen and wooden storehouses, and timeless rustic scenes that reach back to the very origins of Japanese cultural memory.

Some of the local houses are government-designated Important Cultural Properties, with different styles of gassho-zukuri architecture to see and compare. For instance, the Murakami residence is a beautifully preserved example of the original building style with minimal rebuilding done over the years; the Iwase residence, at five stories tall, is one of the largest of this kind in Japan; the Haba residence is built in the oldest gassho-zukuri style. The Murakami and Iwase houses are open for viewing, and visitors can hear a variety of Japanese folksongs, including the oldest of all, Kokiriko-bushi. The joy of ancient music set among timeless countryside scenery should not be missed. 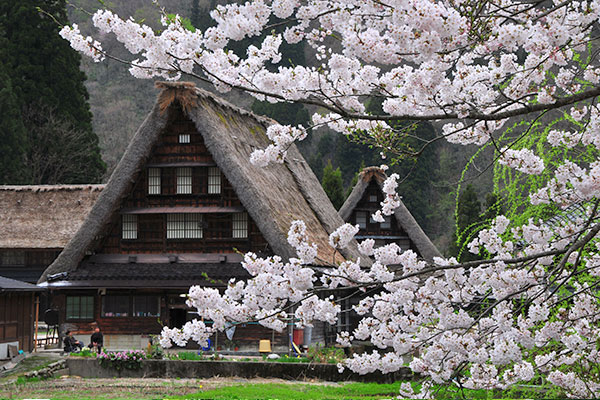 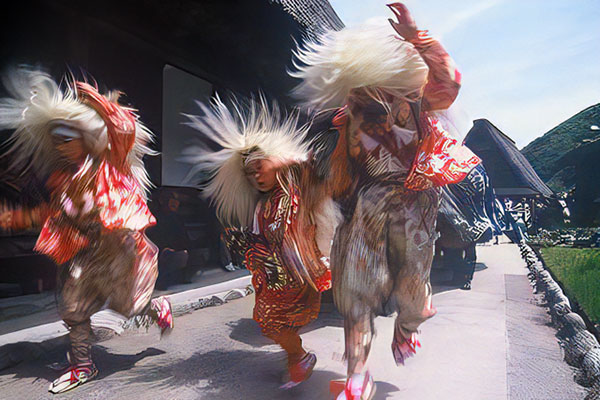 Another attraction is the Gokayama Spring Festival between April 19 and May 6. The festival, offering prayers for a bountiful harvest, is a live affair featuring the different villages’ unique lion dances.

Hotel JAL City Toyama is just three minutes’ walk from JR Toyama Station, it is ideally located for business and leisure travel. All 252 guest rooms, various room types are available to cater to a variety of needs, including those with spacious queen-sized beds and connecting rooms that accommodate up to four guests.

The breakfast buffet is a splendor of local delicacies, combining all the best seafood from the bountiful Toyama Bay and morsels from the pristine environment of the surrounding mountains. And the local Toyama saké are perfect accompaniments to local delicacies for lunch, dinner or at the bar. 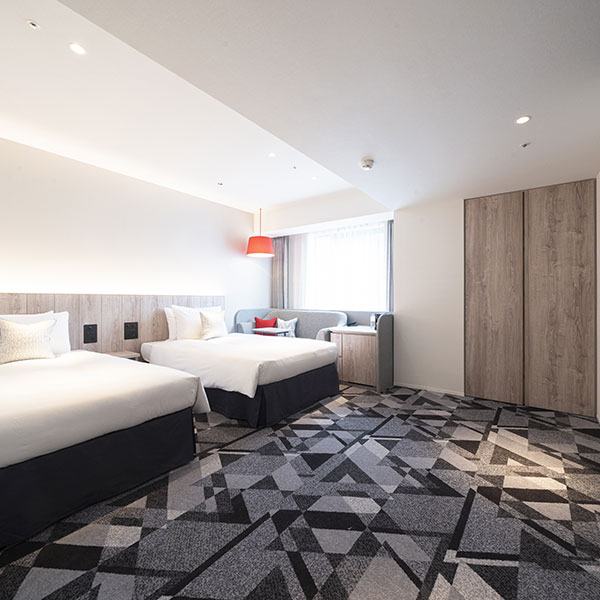